Rosila Salim (seated), manager of hajj and umrah agent Shahidah Travel, speaking to a customer at her office on Jan 31, 2019 in Singapore. SALAAM GATEWAY/Emmy Abdul Alim

30 mln pilgrims by 2030: Travel agents upbeat about their competitive advantages over increasing digitalisation and ‘DIY Umrah’

Last month, Saudi Arabia updated a portal that shows umrah packages offered by licensed travel agents around the world. It’s currently in a rudimentary listing format but the plan is for would-be pilgrims to be able to compare and book packages, flights, and apply for their umrah visas. This Maqam portal, said the Saudi state news agency, is in line with the Ministry of Hajj and Umrah’s “strategic transformation into digitalisation” to “downsize and ease procedures required for umrah”.

Another initiative in line with this “strategic transformation” was the memorandum of understanding (MoU) signed in December between the Saudi ministry and Singapore-based online travel agent (OTA) Agoda. This was a significant milestone as it was the first time the ministry had signed an MoU with a global OTA. The two parties will collaborate to “build future services including guest flow and booking accommodation”. The first product, which has already been released, is a dedicated site on Agoda for booking hotels that have been certified by the ministry for umrah visitors.

The development of Maqam and the partnership with Agoda are meant to drive Saudi Arabia’s use of technology to manage the anticipated increase in visitors towards the Vision 2030 goal of 30 million foreign umrah pilgrims annually. To put that number in perspective, 6.5 million pilgrims travelled to Saudi Arabia for umrah in 2017: that’s 4.6 times fewer visitors than the 30 million goal. How the Saudi government will reach this goal is another story.

For now, what’s clear to the umrah sector is that these digital developments have the potential to disrupt the current supply chain. But not everyone’s worried.

“I’m ecstatic to learn how active and pro-active the Ministry of Hajj and Umrah has become,” Mohsin Tutla, chairman of London-based business service company Hajj People and the World Hajj and Umrah Convention, told Salaam Gateway.

The ministry, said Tutla, is mandated to implement solutions not only for the challenges affecting umrah today but also for those that will arise in the future.

“What is important to note is that the Ministry of Hajj and Umrah has chosen to focus on emerging technologies to bring efficiencies and is willing to openly work with international companies whose competencies add value to the process of hajj and umrah,” he added, referring to the Agoda partnership.

While a solution such as Maqam would be welcomed by travel agents that can sell their packages to the global market, the prospect of allowing would-be pilgrims to apply online for their own visas and book their accommodation and flights is a different matter.

Fazal Bahardeen, who heads halal travel consultancy pioneer CrescentRating, said the disruption comes not only from the industry, but it is also pushed from the ground up. He calls this “DIY Umrah”.

“We see that younger Muslims will put together the umrah trip on their own,” Bahardeen told Salaam Gateway.

“Booking their own air tickets, hotels (Agoda is a good example), ground transport (as this inventory becomes available) etc,” said the Singapore-based consultant.

The main enabler of DIY Umrah, said Bahardeen, is the ability for individuals to apply for their own visas online.

“According to many sources, Saudi Arabia is looking at doing so soon,” he said.

Security is the most critical consideration here.

“Security is paramount in Saudi Arabia. The thousands of hajj and umrah companies registered and operating around the globe are the first line of defence in this process,” said Tutla.

Umrah travel agents outside Saudi Arabia are required to cough up a security deposit equivalent to 200,000 Saudi riyals ($53,333) to acquire a licence to process visas on behalf of pilgrims.

Baluki Ahmad, chairperson of HIMPUH, the association whose 284 agencies arrange umrah for around 60 percent of Indonesia’s pilgrims, is certain the Saudi government will prioritise security.

“The Saudi government will not want people to visit and not return, or overstay,” Ahmad told Salaam Gateway.

Around 900,000 pilgrims from Indonesia performed umrah last year and the travel agents are responsible for the safe return home of each one of them.

In India, which last year sent the third-largest umrah contingent behind Pakistan and Indonesia, agents Salaam Gateway spoke to have mixed feelings about self-service visa applications.

Ebrahim Hasham Kolsawala, chairperson of All India Haj Umrah Tour Organisers Association, takes a realistic view. “Saudi Arabia has been talking about e-visa, online umrah, etc. Sooner or later, this will happen but they will face a lot of practical difficulties,” he told Salaam Gateway.

Shamshad Ahmed, owner of Al-Ameen Tours & Travels in Kolkata, and Yusuf Ahmed Kherada, CEO of Mumbai’s Al-Khalid Tours & Travels, echo Ahmad’s concerns about illegal overstayers, stressing that under the present system, agents are responsible for all aspects of pilgrims’ safe passage and stay during umrah.

“If they allow direct e-visa, e-umrah, who will take the responsibility for the pilgrims?” asked Kherada. “Those who go for umrah are the responsibility of the agent who has to take care of transportation, stay, food, etc. If the agent fails to provide all these facilities then the Saudi government provides them but they recover the cost from the agent by deducting his deposit money,” Kherada said.

The current visa application system requires licensed agents to register pilgrims’ visa applications, including their flight, ground travel and accommodation details, through an electronic system linked to the ministry of hajj and umrah. The ministry’s decision is fed back into the system and, depending on the arrangements in each country, the Saudi ministry of foreign affairs through its embassies worldwide will complete the processing of the visa. The entire process could take up to a month.

“These pilgrims are the ones who have travelled to Saudi a few times already and are familiar with the umrah (process),” said Salim. However, they would still need a licensed agent to register and process their visa applications. Shahidah Travel charges them a fee for the service.

In another Muslim-minority country, Sophia Ali of Al-Amanah Hajj & Umrah in Southall, UK, said arrangements like the Saudi deal with Agoda are affecting agents.

“The market used to be that you had to take a full package—visa, transport, accommodation. Now you can take your hotels from booking.com, your visa from somewhere else, and you can arrange your own transportation,” said Ali.

Small agents, she said, can’t compete with the prices offered by the likes of Agoda and Booking.com.

A possible scenario for self-service visas would remove the agents from the equation and individuals would be able to register directly to the Saudi authorities.

But even as she’s seeing more pilgrims go the DIY way, Salim doesn’t believe licensed agents will go out of style because most Singaporeans are either “pampered” or too time-pressed and want the convenience agents can give.

In India and Indonesia, agents say most pilgrims are not educated enough or don’t have access to tech to DIY Umrah.

“Many people who come from countries like India, Pakistan or Bangladesh are not very educated,” said Kolsawala.

“It would be difficult for them to use technology directly,” he added.

Mohammed Akhtar Hussain from Al-Hira Tours & Travels in Mumbai, agrees. “[P]eople in India do not expect to apply for visas and organise the trip directly. For people here, the most important thing is that they can see the person they are booking with,” said Hussain.

Syam Resfiadi, CEO of Patuna Travel, sees the same in Indonesia. “We have around 63 branch offices across main cities and the majority of applicants still walk in compared to going online. They still want to see, to visit our office to come and hand over the money, documents or just have conversations with our customer service staff,” said Resfiadi.

“It’s about building trust with each other.”

Additionally, for most Indonesians language is also an issue, said both Ahmad and Resfiadi. The assurance of having an Arabic-speaking guide, either one from within Indonesia or a local Saudi one, is still a priority.

In the UK, Dina Mansab, general manager of AFTA Tours in Harrow, said certain demographics still prefer doing things face-to-face. “If you’re talking about the small travel agents on the high street, the older generation would still like to go to a travel agent, and they’d rather pay in cash.”

She sees the younger Muslims doing DIY Umrah, the ones who “have more independence” and who would pay online.

Still, this group of travellers appreciate that many details go into the umrah and they would need to speak to someone, said Mansab.

‘NOT A NORMAL HOLIDAY’

Fellow UK-based agent Sophia Ali in Southall agrees, saying the pilgrimage is “not a normal holiday”.

“Until you speak to someone you don’t get a good gist of hajj and umrah. We get a lot of bookings from people that enquire by email. We call them up because we don’t see it as a normal holiday and the customer needs to know all the ins and outs about it,” said Ali.

Another advantage agents offer is the assurance of a religious guide to accompany pilgrims.

HIMPUH’s Ahmad points out this difference between the pilgrimage and other types of travel. “Umrah travel is different from leisure travel. Customers still need guidance, although a few who already understand all aspects of worship can do this alone.”

Companies such as Shahidah Travel in Singapore also offer classes teaching would-be pilgrims rituals and prayers for the umrah.

Because of this core aspect, what Agoda is introducing, said Tutla, is “a reduction in stress load and facilitate growth” for the umrah sector overall.

‘AGODA NOT A DISRUPTION’

Tutla has more assuring words for the thousands of umrah agents worldwide.  “Agoda is not a disruption – the hajj and umrah industry as an ecosystem consists of more than 50,000 contributors worldwide, supported by people belonging to various social, commercial and educational backgrounds.”

Increasing digitalisation of the sector is inevitable as the Saudi government tries to reach its 2030 goal of 30 million pilgrims annually. To support this massive growth, Tutla believes a lot more is coming.

“We will see more than one Agoda introduced to service a number like that and even if we did, I very much doubt it will affect the business of the 3,000 agents to the extent that it will be considered a disruption,” he said.

All India Haj Umrah Tour Organisers Association chairperson Kolsawala agrees. “The agent’s role may be reduced but it won’t be eliminated,” he said.

“Generally speaking, it’s always going to be a difficult task to make the transition from an old system to a new system, technology or business model, but I am sure those who are in this business for many years and want to do it seriously will adapt.” 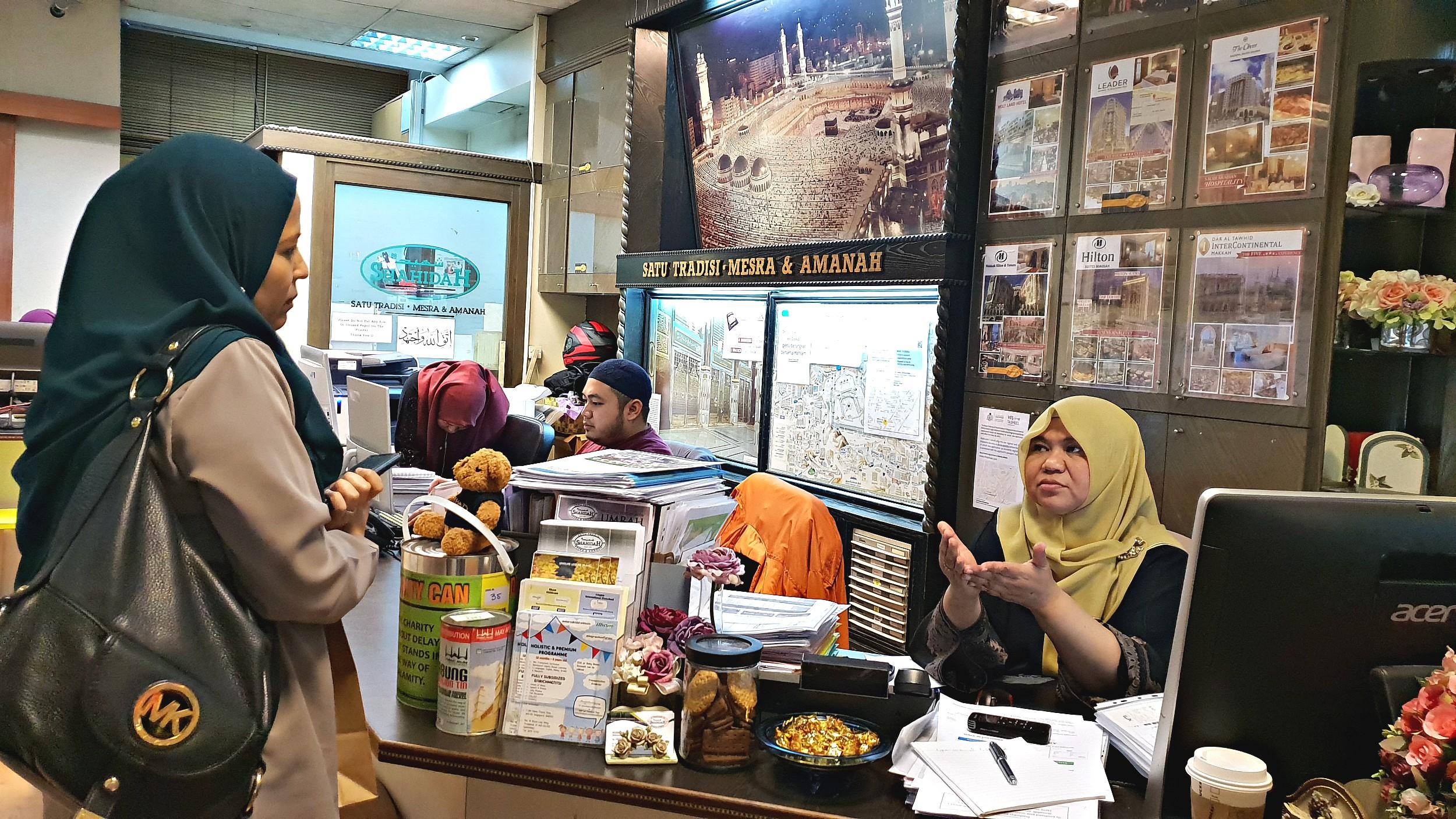