Research for this article was supported by Crescent Wealth. This article was first published in the State of the Global Islamic Economy 2020/21 report. You can download the pdf copy here.

As part of the launch of the State of the Global Islamic Economy Report 2019, DinarStandard prepared a brief outlining Australia’s standing as a top Islamic economy player for its launch of the report in Sydney, Australia. A key highlight was that Australia was the 9th top Islamic economy exporter in halal food produce, exporting over A$5.3 billion to countries such as Indonesia and the Gulf Cooperation Council (GCC) countries.

What was not as apparent is Australia’s immense untapped potential for serving the Islamic economy’s other significant sector – Islamic finance and investment. One of the twenty largest economies globally, Australia is one of the few countries that, prior to 2020, experienced just two years of negative growth over the previous 6 decades.

Despite these strong fundamentals and its standing as a G20 country, Australia has yet to make its mark in Islamic finance.

The Islamic Finance and Investment Opportunity

Given the size of the financial industry and the size of the growing Muslim population, there is a natural potential for Shariah-compliant financial services. There are two main opportunities for Islamic financial products and services in Australia: superannuation and mortgages.

THE MARKET FOR SHARIAH-COMPLIANT SUPERANNUATION

The superannuation industry is a significant driver of financial services in Australia that presents natural opportunities for Islamic products and services. In terms of size, the superannuation industry’s assets were A$2.9 trillion in June 2020, with A$1.8 trillion in investments. These investments were made primarily in equities (49.2%), fixed income and cash (33.6%), and property and infrastructure (14.2%). 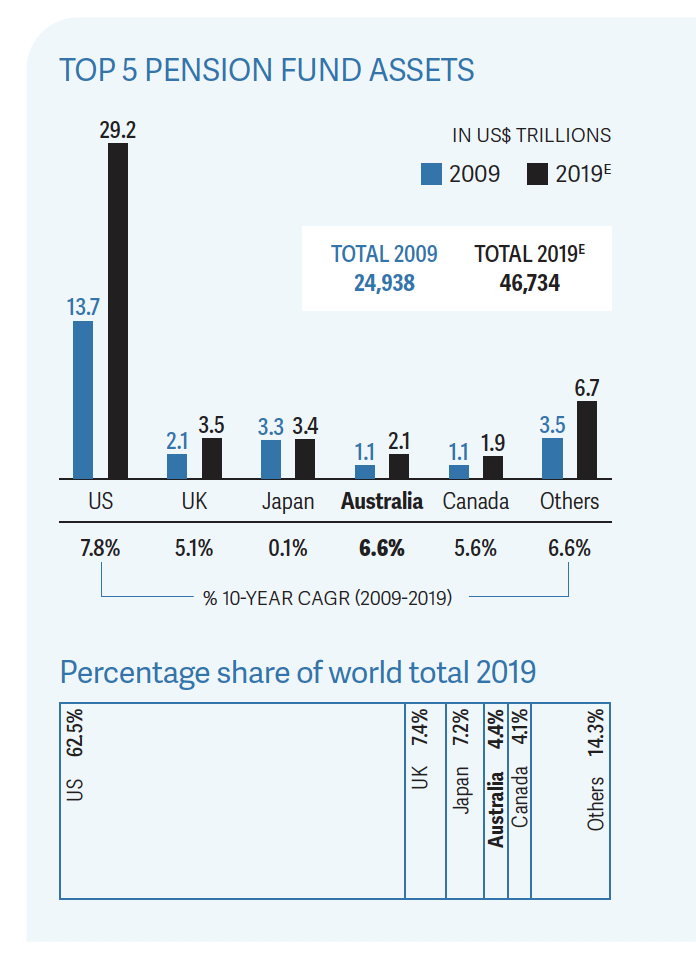 With increased population aging and the rising Silver Economy, there is a need to provide Shariah-compliant superannuation services as well. At present, most offerings are interest-based and may also invest in sectors that are incompatible with Muslim retail investors’ values, e.g., defense or alcohol industries. Currently, there is only one full provider of Shariah-compliant superannuation, Crescent Wealth Super, with several smaller platform players entering the market more recently. Crescent Wealth Super manages just under $300 million in retirement funds or 0.5% of the total market of A$55.9 billion, which suggests that there is an untapped upside potential of nearly A$55.6 billion.

Despite its size, entering the Shariah-compliant superannuation industry in Australia presents several challenges. First, many older Muslims do not see the need for superannuation and would rather invest funds their own way, fueling the rapid growth of the Self-Managed Super Funds (SMSF) segment of the superannuation market. Second, despite the industry’s overall size, Muslims are generally younger and therefore have not accumulated substantial savings compared to the broader population. Third, there is a lack of liquid investment options outside Shariah-compliant equities, particularly cash equivalent investment instruments, and liquid income-generating products denominated in Australian dollars (i.e., sukuk).

As a result, Australian superannuation providers must resort to hedging, adding an additional layer of costs. 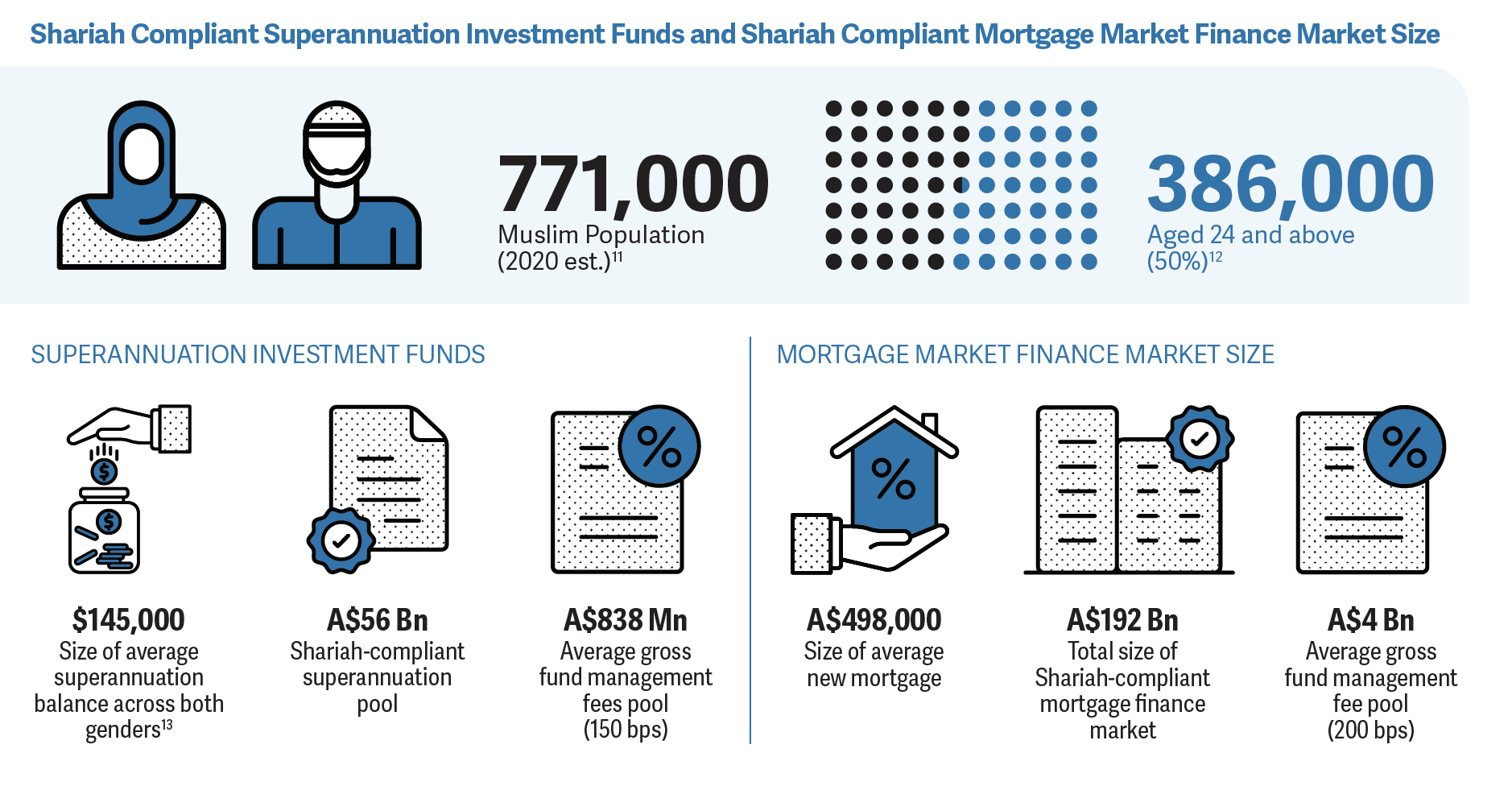 The housing market provides another growth opportunity for Islamic financial products and services in Australia. In the 30 years leading up to 2015, Australian housing prices increased on average by 7.25% per year. Currently, there are over A$1.82 trillion in outstanding home loans in Australia, with banks providing most housing finance (96%) and a high level of homeownership (66%). At present, mortgages are a significant driver of the financial services business in Australia since they currently provide higher margins (anywhere between 200 basis points and 350 basis points) and are less prone to disruption than other financial services areas. Currently, thousands of Muslims cannot participate in the consistent growth of the housing sector due to the lack of competitive and high-quality Shariah-compliant options. Moreover, 41.6% of Australian Muslims are married, and Australian Muslim women have 2.5 children on average, yet only 15% of Muslims fully own their properties: these figures further suggest an unmet need for mortgages catering specifically to Muslims in Australia.

However, despite the need and significant role of home finance in the financial services industry, options for Islamic home finance remain limited in Australia, with only four traditional primarily community-based providers. These providers rely mostly on funding from largely conventional financial institutions and provide an altogether lower level of service quality, presenting an opportunity for further competition and potential new fintech players to enter this space with a differentiated and professional proposition from the traditional community-based providers.

Recently, the criteria for mortgage lending were significantly tightened as a result of the 2019 Financial Services Royal Commission report. As a result, despite the significant size of the Shariah-compliant housing finance market, this regulatory development will work against new providers trying to break into this market. Working with existing licensed financial services providers may reduce some of the significant investment in time and dollars required to get to market.

With an overall market for Islamic superannuation and mortgage finance around the A$250 billion range, overall growth prospects for Islamic finance in Australia remain bright: the market is young with very few professional operators and has much room for further expansion and diversification, and this market space may well become a noticeable contributor to the Global Islamic economy and Australia’s economy in years to come.

Research for this article was supported by Crescent Wealth. This article was first published in the State of the Global Islamic Economy 2020/21 report. You can download the pdf copy here.