KUALA LUMPUR - As Malaysia’s capital city and its surrounding area slip back into lockdown, the return to movement restrictions has come as little surprise to many business owners.

Expectations of a so-called conditional movement restriction order (CMCO) for the capital, the government seat of Putrajaya and Selangor, the highly populated state that circles them, have been rising in recent weeks after the daily number of COVID-19 infections began to grow in mid-September.

The CMCO follows other similar targeted lockdowns in the northern state of Kedah last month and last week in the port city of Klang in Selangor, and comes in tandem with one also being enforced in Sabah in East Malaysia. The latest round CMCOs are expected to last two weeks.

“I think it is a correct move made… to declare the state of Selangor under the CMCO to ensure that on the basis of preventive and proactive actions, [it] can actually curb the pandemic,” prime minister Muhyiddin Yassin told the press after announcing the move on October 13.

Malaysia’s infection rate is not high by global standards, but a gradual rise from tens of new daily cases between June and September and hundreds in October has alarmed health officials.

On the day the new CMCO was announced, Malaysia had 660 new cases, concentrated in Sabah, where high-profile elections were held late last month, and Selangor, with 443 and 76 cases respectively, while Kuala Lumpur registered just 10 new infections.

Under the terms of the order, travel restrictions are being enforced with journeys limited to two people from the same household for work, grocery shopping and emergencies within the areas. Those who travel outside their home district for work—albeit within the same state—need to show approval from their employer, while out-of-state travel requires police approval.

Most businesses have been told they may remain open, including restaurants and convenience stores, but schools and colleges must close. Ride hailing and train services will operate as normal.

Businesses canvassed by Salaam Gateway have largely been stoic in response to the CMCO in Kuala Lumpur and Selangor, considering it a necessary evil.

“We were not really surprised, most of us knew it was coming with infection numbers rising,” said Nur Natasha Rozali, managing director of Ma'ahad Tahfiz Ismail Kindergarten, a privately-funded religious pre-school with some 35 pupils in Selangor. “We had already prepared to return to doing online classes.”

The kindergarten had first turned to virtual teaching during Malaysia’s earlier nationwide lockdown between March and June, in a bid to adapt to the new situation.

The young children find it much harder to adapt to learning through a computer screen than secondary school and university students. It’s also challenging for the tahfiz’s six teachers.

“For regular subjects the children are taught in groups, but for memorisation of the Quran, we do one-to-one. These classes last for half an hour to an hour and our teachers say they are far more tiring than normal classes,” Nur Natasha told Salaam Gateway.

“Most of our parents are business owners, so for them to find someone to look after their child at home is a problem.

“All our finances are covered by our upper management. For now, we are simply giving parents discounts as they have been badly affected and are struggling,” she added.

Like schools, gyms have been forced to shutter their premises, and Putra Wayan bin Muhamad Yazid’s Wow Fitness on the outskirts of Kuala Lumpur will also be turning to virtual classes in a bid to earn some revenue.

“For now, we are going to try over the next two weeks to conduct online training via video calls. Other than that, there is not much else we can do,” he told Salaam Gateway

After Wow Fitness reopened in June following the first lockdown, it struggled to retain customers who had feared infection from the gym’s communal environment. Though things have begun to pick up, it has not managed to reach pre-coronavirus levels of custom, especially since the gym limits its attendance to ten an hour.

“Even when we are full, there is still ample space to do your workout and be socially distanced from one another,” said Putra Wayan.

“We have equipment sanitisers and we do cleaning as often as we can. If you ask me, a place like a supermarket is a much more infectious place to go to. Once you are in a supermarket, nobody actually cares about social distancing.”

The owner, who opened Wow Fitness with his father four years ago as a Muslim-friendly gym, is reconciled to a similar cycle of reticence happening again once the CMCO is lifted.

“It’s going to happen all over again and people will be cautious. All we can do as the premises owner is to be strict so our customers continue practising social distancing.”

For Izmil Azim Zin Dahari, executive director of Zenith Tours & Travel in central Kuala Lumpur, the latest lockdown has come as a blow at a time when his business was starting to find its feet.

“Inbound bookings had dropped to absolutely zero, but then business started to come round this month and we began receiving some ticketing enquiries. But then this happened,” he told Salaam Gateway.

“I was half-expecting it because infection numbers had started to rise. But if things had gone the other way, maybe we could have avoided it.”

The next two weeks of CMCO will provide an opportunity for him to digitalise his business, and for his four staff—down from eight before the pandemic—to revive their spirits after a stressful few months.

“Everyone in the industry is going digital. We are not fully digitalised yet so we are going to do this in time for the doors opening again. The tourism industry is not going to die because everyone is going to travel, but to survive we need to promote Malaysia’s domestic tourism, which is also not doing very well,” he added.

The terms of the CMCO appear to be more favourable to the foodservice segment, which was hit particularly hard in the earlier lockdown, according to Muiz Alias, owner of Rasta TTDI in Kuala Lumpur, a halal food court with 16 vendors.

Whereas previously, in-house dining was not allowed and food businesses could only serve takeaways, this time table service is permitted from 6am to 10pm, though only two patrons will be allowed at each table.

“Nobody knew how serious COVID-19 was until the moment when we locked down. The difference between now and then was the whole country shut down. Now we just need to be patient so the whole thing will be over,” Muiz told Salaam Gateway.

As both the owner of the premises and operator of a drinks stall there, he faces pressure in ensuring each of the customers, his own staff and his tenants obey the social distancing regulations in place.

“From the first lockdown we got the hang of the SOPs and social distancing. Then things got lax and everybody thought they’d be okay, and with this new lockdown, it’s very difficult to control people in a food court area.

“The hard part is balancing the customers, staff and vendors. I’m responsible for the whole place—for jobs and livelihoods—and that’s a new pressure I’ve never faced before. But there’s no choice: it’s COVID and we just have to make the best of it,” Muiz added. 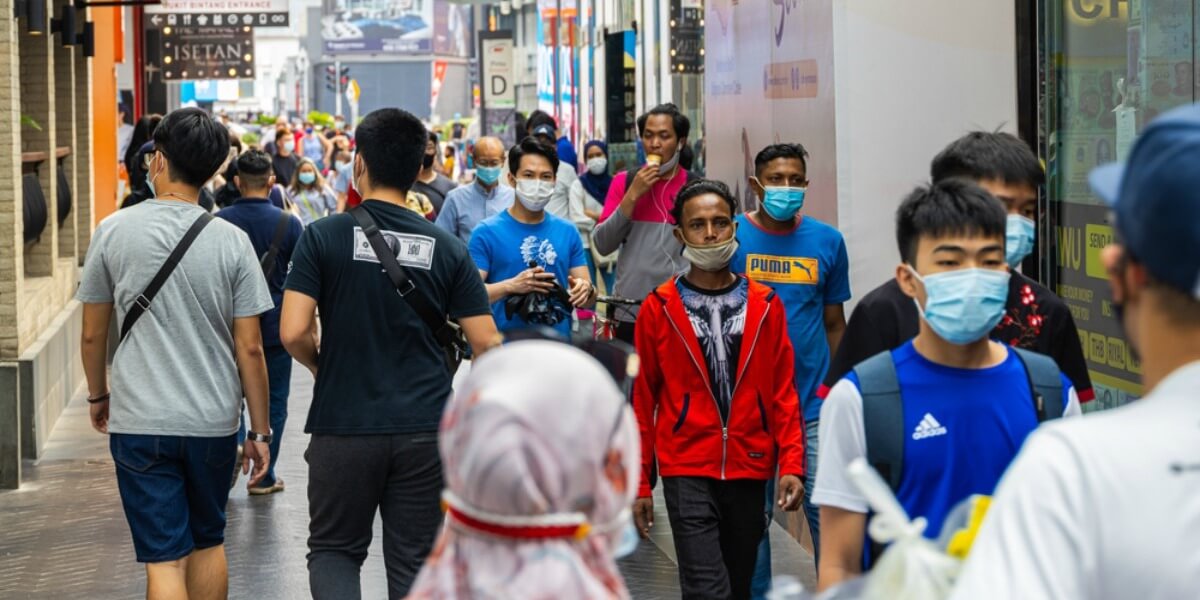 Businesses resigned to new Kuala Lumpur lockdown
KUALA LUMPUR - As Malaysia’s capital city and its surrounding area slip back into lockdown, the return to movement restrictions has come as little surprise to many business owners. ..
https://www.salaamgateway.com/story/businesses-resigned-to-new-kuala-lumpur-lockdown