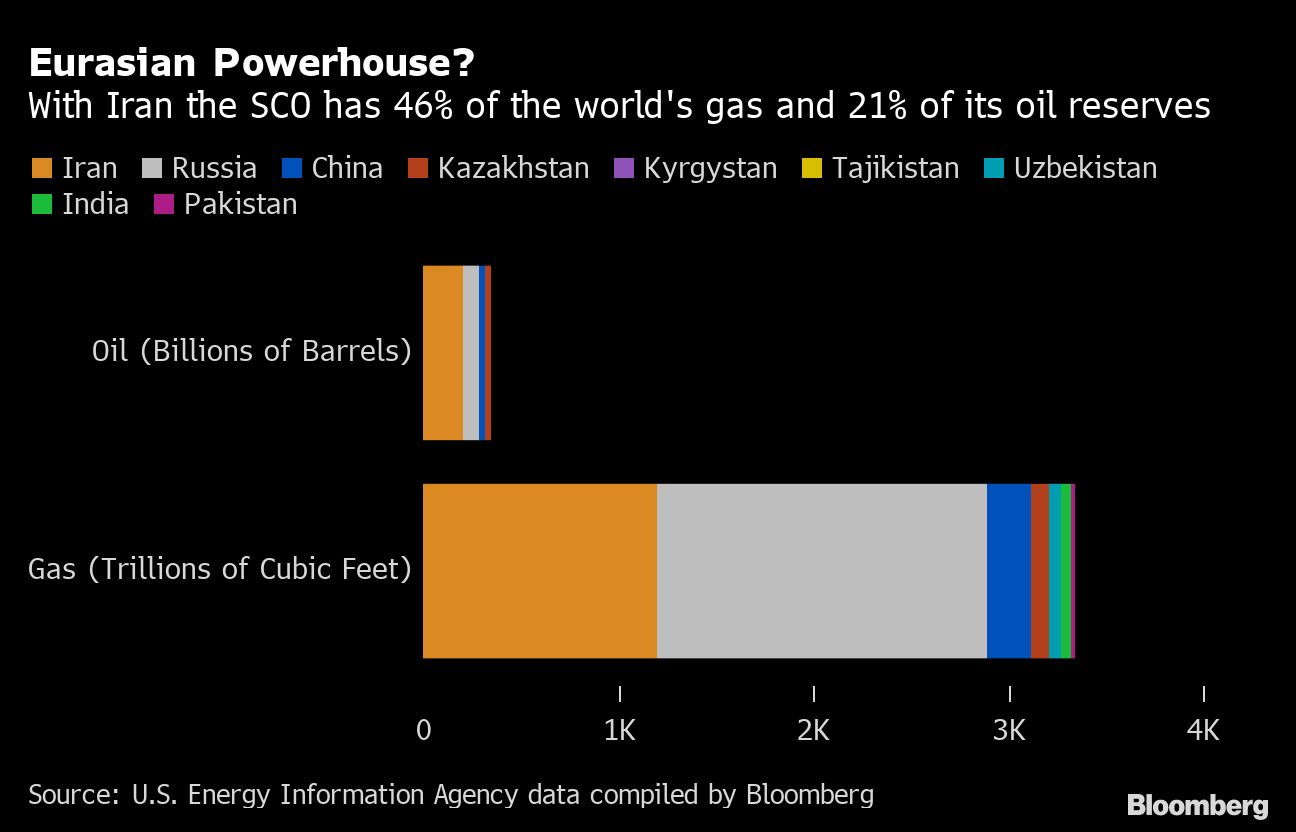 Published 16 Sep,2021 via Bloomberg Politics & Policy - Iran’s new president is flying to Tajikistan for his first foreign trip where he’s expecting to gain membership of a growing Eurasian club led by China and Russia, whose economic muscle has helped Tehran blunt American sanctions.

The Shanghai Cooperation Organisation, or SCO, was founded two decades ago in St. Petersburg and currently has eight members representing half the world’s population and a quarter of its economic output.

Iran’s been angling to join the bloc that also includes India and Pakistan since 2005, with membership a key goal of conservatives who after the June election of President Ebrahim Raisi control all the levers of power. They want tighter economic integration with Beijing and Moscow to help replace some of the sanctioned trade with western economies.

Raisi has signaled his administration’s intention to rejoin stalled negotiations in Vienna over removing U.S. sanctions and curbing Iran’s nuclear program, but when talks will resume is unclear.

The SCO contains some mutual security elements, like a common approach to combating terrorism. However, its charter goals are heavily weighted toward trade and economic cooperation, including jointly developing “energy systems” and “balanced economic growth” without allowing any country to dominate. The group convenes for two days of meetings Thursday.

The meeting in Dushanbe, Tajikistan, takes place amid mounting tension over Iran’s nuclear program, along with international efforts to revive the landmark 2015 agreement between the Islamic Republic and six world powers. Chinese and Russian diplomatic and financial support have helped buffer the impact of sanctions imposed by the Trump administration.

President Joe Biden held a “strategic discussion” over shared interests with Chinese President Xi Jinping last week, just days after dispatching a top nuclear envoy to Moscow for talks over how to coax Iran back into compliance with the nuclear agreement.

“Of course we have differences of views,” U.S. negotiator Rob Malley said of China and Russia during an interview with Bloomberg this month. “But they’ve also urged Iran to come back to the table and take a realistic position.”

In addition to Iran’s membership, envoys at the SCO meeting are expected to discuss regional security after the U.S. withdrawal from Afghanistan. Even before the U.S. retreat last month, Chinese Foreign Minister Wang Yi was urging the bloc to more aggressively combat the “three evil forces” of terrorism, extremism and separatism, according to state-run Xinhua news agency.

It’s unlikely Iranian membership will bring the SCO any immediate benefit, including over critical energy supplies, said Simon Pirani, a gas analyst at the Oxford Institute for Energy Studies. Companies getting involved with Iran’s oil and gas sector are still subject to U.S. secondary sanctions, exposing them to risks if they help build the infrastructure Iran needs to raise production.

“The problems that face Iranian oil exports because of sanctions also pertain to gas,” Pirani said. “Iran’s domestic gas consumption is very high. So even though it’s one of the main producers, it consumes most of that gas domestically.”