JAKARTA - Indonesia is home to the world’s biggest Muslim population but Islamic finance comprises only around 10% of financial assets. The government wants Islamic banks, as a sub-sector, to reach at least 15% of total banking assets by 2023 (it was 6.47% last year) and it has a national masterplan to drive growth.

Considering the low uptake of Islamic finance, one woman believes Muslims need a different approach. Dr. Murniati Mukhlisin has been on a mission to teach finance the Islamic way through families, not banks.

“I feel that 90% of Indonesians, whether on campus, in the industry or at the grassroots or family level, don’t really embrace Shariah as their lifestyle,” the Rector of Islamic university Institut Tazkia told Salaam Gateway.

Dr. Murniati became Rector of the university in 2017. She started her career at Uni Bank in Jakarta and also worked at Ernst & Young in Kuala Lumpur. She moved into academia in 2002 when she was a lecturer in Islamic accounting and finance and later became an affiliate staff at the University of Glasgow after completing her PhD in 2014. Before joining Tazkia she was at the Essex Business School at the University of Essex.

What the educator considers to be an issue is that young people are driven to view Islamic finance as a career goal, and that degrees are only a pathway to a good job.

“For me, a good job is an additional goal; the main goal is practising Shariah as a lifestyle. In this context, Islamic financial planning or management is a daily need.”

She has the privilege of practising what she preaches at the university where the finance curriculum blends in Quran and Islamic scholarship. At the same time, away from Tazkia, Dr. Murniati runs a company that coaches individuals and families on Islamic financial management. In the last eight years alone, Sakinah Finance has trained 23,173 participants from 28 countries. The company, which she opened with her husband Dr. Luqman Tamanni in 2008, started with a blog that grew into a bestselling book.

In many ways, Dr. Murniati was compelled to start Sakinah Finance not only because of what she wanted to change at the industry level but more so due to her own personal struggles.

“At the industry level, from my personal experience when I started work at Uni Bank in 1991—where our office was next to Bank Muamalat (Indonesia’s first Islamic bank)—I saw at the time that Bank Muamalat only introduced Islamic banking products without training their human capital first.

“The staff promoted the products without actually having them in their minds or their hearts.”

At the family level, she sees people from high school to higher education to the workplace with poor understanding of the concept of Islamic financial management.

“For instance on zakat, they only know zakat, infaq and sadaqah when they put their money in the charity box. But beyond that—who are the beneficiaries, how do we manage zakat, how can we advance beneficiaries to make a better living using the funds—they have no clue. 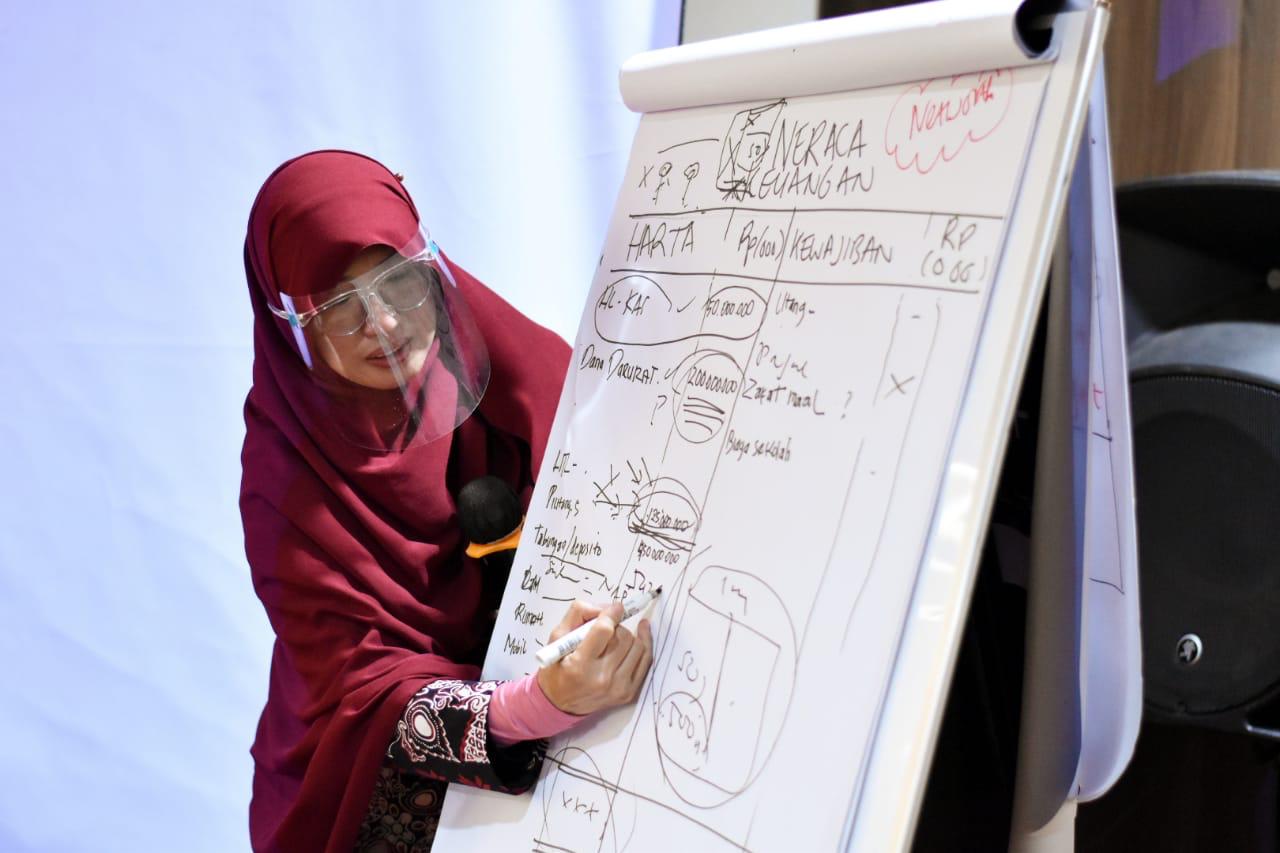 All these observations form layers over the initial core driver of her motivation that goes back three decades—the woman who now leads an Islamic university was not always a Muslim. She was born into a Christian family in South Sumatra and given the name Mu Kim Ni. Her parents were well-off business people who taught her the value of work.

“I learned to become a cashier at my parents’ shop, calculating using an abacus. I made my own ice-cream and sold them in front of the shop, and many other things.”

In her final year of high school she chose to become a Muslim, a decision that fractured the relationship with her family. Rejected, she moved to Jakarta at the age of nineteen and was adopted by foster parents after a recommendation by the Indonesian Chinese Muslim Association.

Perhaps in spite of this painful personal experience, her view of the sanctity of family remains strong.

“As new Muslims, we should maintain a relationship not only with Allah but also with our family. We can’t just break relationships just because we are of different religions.

“My mom, my younger sister and my aunt are Christians but I always try to be close to them. I sent them gifts, food or money at different occasions and alhamdulillah they slowly accepted my new religion.

“The hardest time was when I ran away from home and eventually became independent and able to manage my life.”

She did more than manage. After three years at the conventional Uni Bank she received a scholarship to study at the International Islamic University Malaysia, where she earned her undergraduate degree.

“My intention was to become as good as possible and I was very jealous seeing many clever people. I kept building my knowledge and networking. Later, I saw how it was useful for my life when I took on several positions in industry or on campus – people trust me.”

Through her personal and professional journey she has maintained her line of truth: “The main message that I want to tell people is that a Muslim wife and husband, or a family, can start to implement financial planning that focuses on Islamic values.”

This has never been more the case than during the pandemic, she believes.

“There is a wife and husband of around 80-years-old attending our eight-hour class a day. Participants from Japan are also curious about preparation for marriage and Islamic financial planning for after marriage life, and there is also enthusiasm from a young wife in the UK.”

Sakinah Finance is also preparing to train more than 1,000 participants, from state-owned companies, in planning for their pensions.

As the economy struggles to recover and continues to inflict joblessness and lower incomes for a lot of Indonesians, Dr. Murniati advises that instead of rushing to find other sources of income or starting a new business, people should stop to first take a moment to self-reflect.

“Is our income all halal? What if some of our income came from sources that weren’t Shariah-compliant? Have we done zakat, infaq and sadaqah? After considering all these, then we can try to find a new solution. This is the basic knowledge in Islam.

“But to implement this is another thing altogether.” 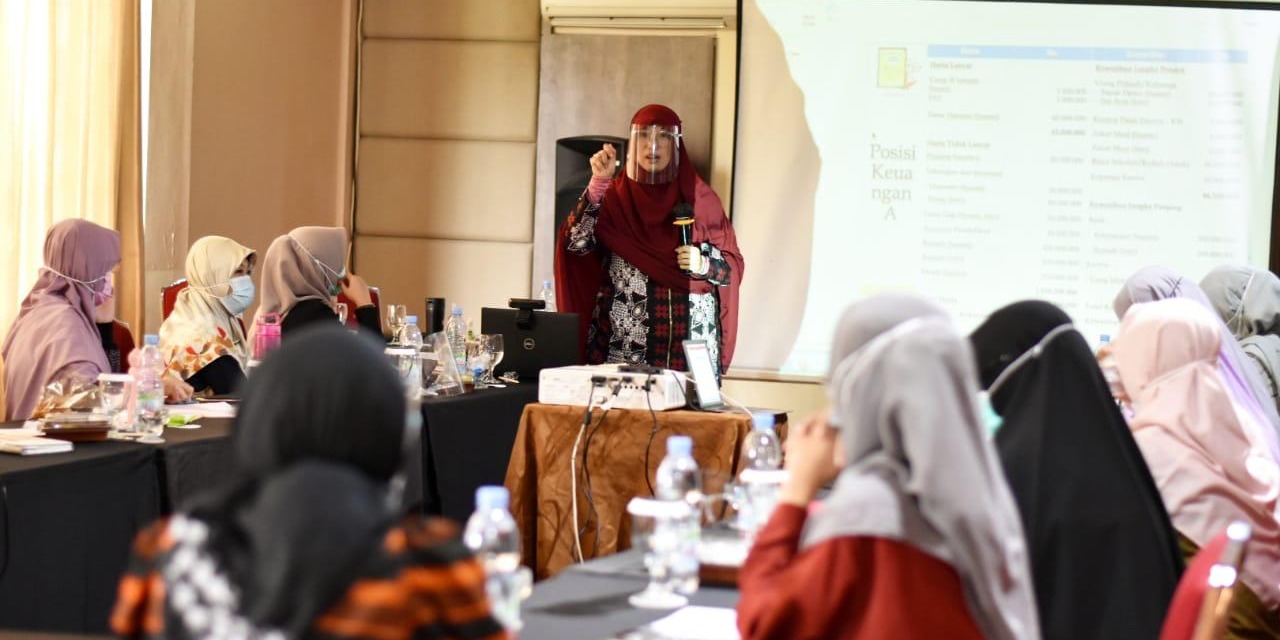 Islamic finance starts at home, not at the bank, says university head and financial management coach Dr. Murniati Mukhlisin
JAKARTA - Indonesia is home to the world’s biggest Muslim population but Islamic finance comprises only around 10% of financial assets. The government wants Islamic banks, as a sub-sector, to..
https://www.salaamgateway.com/story/islamic-finance-starts-at-home-not-at-the-bank-says-university-head-and-financial-management-coach-d