Photo for illustrative purposes only. Doctor examining a boy with a stethoscope in Hasanpur, Haryana, India

Islamic finance pioneers and like-minded community leaders in India have come together to introduce an alternative product to formal takaful, which doesn’t exist in the country.

A not-for-profit health assurance scheme, called Uplift Mutuals Biradaree, started in April this year at two of Mumbai’s Muslim-majority localities, Kurla and Malad. The scheme works on the model of mutual assurance, with certain features maintaining the values of Shariah-compliant finance.

“The mutual health assurance model by design works on the principles of takaful in which people contribute an agreed amount to a common pool to support each other and share risk,” Dr. Shariq Nisar, an Islamic finance academic and professional who helped develop the scheme, told Salaam Gateway.

There is no trading of risk in a mutual scheme, hence no conflict of interest between the insurer and the insured.

The scheme works on the principle of ‘prevention is better than cure’ where steps and precautions are taken to avoid illness in the first place. “It’s not a normal insurance but a health service plus financial aid support,” said Dr. Nisar.

“Monthly clinics are organised in the localities, and doctors are made available on call 24x7. But if one still falls ill, the mutual helps in getting the right treatment and the right doctors at the right price,” he added.

Uplift Mutuals has set up about nine such ‘mutuals’ that cover over 300,000 urban and rural poor in the states of Maharashtra and Rajasthan.

With the new scheme, one of the issues needed to be resolved was that the funds raised would need to be deposited into a bank account that would generate interest income, as India does not have any Islamic banks.

“We have decided to place the funds in a separate current account so that any incidental interest earned from it can be purged,” said Dr. Nisar.

The scheme will now have new Shariah-compliant features to reach out to Muslims.

Uplift Mutuals Biradaree is designed to be affordable and is open to all financially vulnerable families, and not just for Muslims.

The annual contribution has been kept low because part of the capital and operating expenditures are currently met by external funding from the global industry body the International Cooperative and Mutual Insurance Federation (ICMIF).

As part of its 5-5-5 Mutual Microinsurance Strategy for India, ICMIF has partnered with Uplift India Association to deliver mutual assurance coverage to half a million people over the next five years.

ICMIF has 280 members and it is owned, governed and guided by its member organisations, two of which - The Co-operators, Canada, and L?nsf?rs?kringar AB, Sweden - are providing financial and technical assistance to Uplift India.

Dr. Nisar said that when ICMIF studied the Uplift Mutuals model, they realised it worked in line with takaful. “We thought if we could add the Shariah screening features to Uplift Mutuals, we could develop an alternative to takaful that would be acceptable to the wider Muslim community,” he said.

“There is no gharar (uncertainty), maysir (gambling), or riba (usury) involved.”

The need for a Shariah-compliant insurance alternative has been felt for a long time.

Official regulations do not allow the creation of formal takaful initiatives for India’s 172 million Muslims. Salaam Gateway has previously reported how India’s path to introducing Islamic banking continues to be strewn with regulatory, political and perception hurdles.

In this context, Dr. Nisar said, “‘mutuals’ are a good starting point”.

The scheme does not come under the purview of the Insurance Regulatory and Development Authority (IRDA) as it’s a not-for-profit product which doesn’t transfer the risk and is meant for financially vulnerable families. The Indian Public Trusts/Societies Act permits people to set up such members-only schemes.

A large section of India’s 1.32 billion population is excluded from insurance coverage, which had a penetration of 3.49 per cent compared to the global average of 6.28 per cent in 2016, according to India’s Economic Survey 2018 released earlier this year.

While no separate survey has been done to assess Muslims’ participation, the common perception is that a large number of them don’t buy existing insurance products for religious reasons.

The BSE Institute, a subsidiary of the Bombay Stock Exchange, will conduct a survey for Cambridge University in August this year to study various aspects of health insurance in India. Dr. Nisar, who heads the BSE Institute’s research team, said the survey will also cover the religious preference of people with regard to insurance.

More than a hundred families have already been enrolled into the scheme that is currently being implemented and managed by two Muslim entrepreneurs who are using their own resources to mobilise support for it.

One of them, Abdul Gafoor Qureshi, owner of Abdullah’s Electronics Centre, has enrolled all his employees under this scheme.

“We used to have our own internal health benefits scheme for our staff, but we didn’t have a back-up of doctors, hospitals or medicines,” said Qureshi.

“So when we got to know about Uplift Mutuals Biradaree and its compliance with Shariah, we decided to enrol the families of 60 of our staff members, a total of around 260 people, into this scheme,” added Qureshi, whose company is paying the premium on behalf of its staff.

Qureshi plans to expand the scheme to other Muslim localities of Mumbai by initially enrolling religious scholars, clerics, imams and their families.

“After Ramadan, we will start reaching out to this section of Muslim community which works for a nominal salary at mosques and is in need of some sort of health insurance coverage. The idea is to extend the benefits to them first so that they can spread the word among fellow Muslims,” Qureshi said.

“Once we cover all the mosques and Muslim localities of Mumbai, we can enter other cities of India.”

Aslam Khan, co-owner of Octaware Technologies, a software development company based in Mumbai, is spearheading the scheme in Kurla.

Khan also runs a number of non-governmental organisations, hospitals and health clinics and already offers healthcare facilities to over 120 families of religious scholars, clerics and imams, and other poor people at concessional rates as part of his charitable activities.

“I was looking to rapidly scale up my project to cover more people. But when I heard of Uplift India, I realised that they are doing the same thing and have a wide network. We thought it better to partner with them to use their platform and reach out to more people from our community,” said Khan, adding that they have managed to enrol 50 to 60 families within a month.

Since mutual health assurance schemes depend on the number of people enrolled – the higher the number, the more viable the scheme – Khan’s target is to enrol around 1,800 families within six months.

“Currently, it’s being done at NGO and community level for poor people, families whose monthly household income does not exceed 30,000 rupees. But, once this model starts working successfully, we can look to target people from other income categories who are capable of paying a higher premium in return for bigger and wider coverage,” he said. 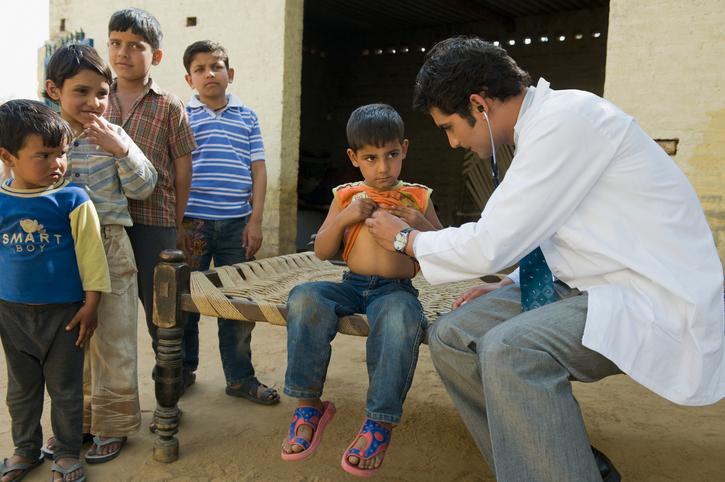