Wheat provides between 24 and 49% of Arab consumers’ daily calories, predominantly via bread (Shutterstock).

Global agricultural trade is particularly affected given Russia and Ukraine hold the keys to world staples wheat and sunflower oil.

The Russo-Ukrainian War is profoundly impacting on global politics, economic growth and specifically agricultural trade, triggering concerns in the Arab region struggling to secure sufficient cereal imports for its citizens.

Russia and Ukraine are key food bowls globally, most notably for the Arab region where insufficient land and water resources do not permit cereal self-sufficiency. While the widely used policy by Arab governments to import cereals has worked for decades, it is now enduring its potentially worst stress test.

The pressure will exceed that caused by the food price spikes of 2007/08 and 2010/11 and following the COVID-19 pandemic. Holistically the Arab region receives 40-50% of its wheat imports from the two warring nations and is thus vulnerable to the secondary effects on food security.

Arab countries are among the most vulnerable countries to cereal availability and price fluctuations. Driven by robust demand and supply shortfalls in some producer regions, the Food and Agricultural Organisation of the United Nations (FAO UN) Food Price Index has continuously grown since the second-half of 2020 and reached an all-time high in February 2022. This was before the Russian invasion of Ukraine.

In the wake of the Russian attack on Ukraine on 24 February 2022, grain prices on the futures markets spiked to an all-time high in the FAO Food Price Index’s (FAO, 2022) history.

The invasion can affect grain prices in three ways – crop losses (especially in Ukraine); logistical problems as most exports travel through western Black Sea ports including Odessa and trade financing and payment processing problems due to sanctions.

Since Russia is also a major fertiliser exporter such as potash, nitrogen, phosphate and ammonia, that collapse will affect the cereal production in other countries. Russia and Ukraine account for 29% of global wheat exports, 31% of barley, 19% of corn, 23% of rapeseed/canola and a staggering 78% of sunflower oil – and the Arab region will bear a disproportionate burden of the crisis.

Given its structural weaknesses related to land and water availability, it disproportionately relies on staple food commodity imports with wheat particularly important for human calorie intake and barley as animal feedstock.

According to the UN Economic and Social Commission for Western Asia 2015 (UNESCWA), wheat provides between 24 and 49% of Arab consumers’ daily calories, predominantly via bread. This makes wheat the single most important crop in the Arab region for food and nutrition security.

Lebanon and Egypt are particularly exposed to developments in the Black Sea. In 2020 the two warring nations accounted for 96% of wheat imports to Lebanon and 86% to Egypt.

Other highly import-reliant countries are Mauritania, Oman, Yemen, Tunisia, Libya and the United Arab Emirates. Although there has been a small decline in imports from Ukraine and Russia and more trade diversification since 2018, the Arab region is disproportionately dependent on the Black Sea for wheat. 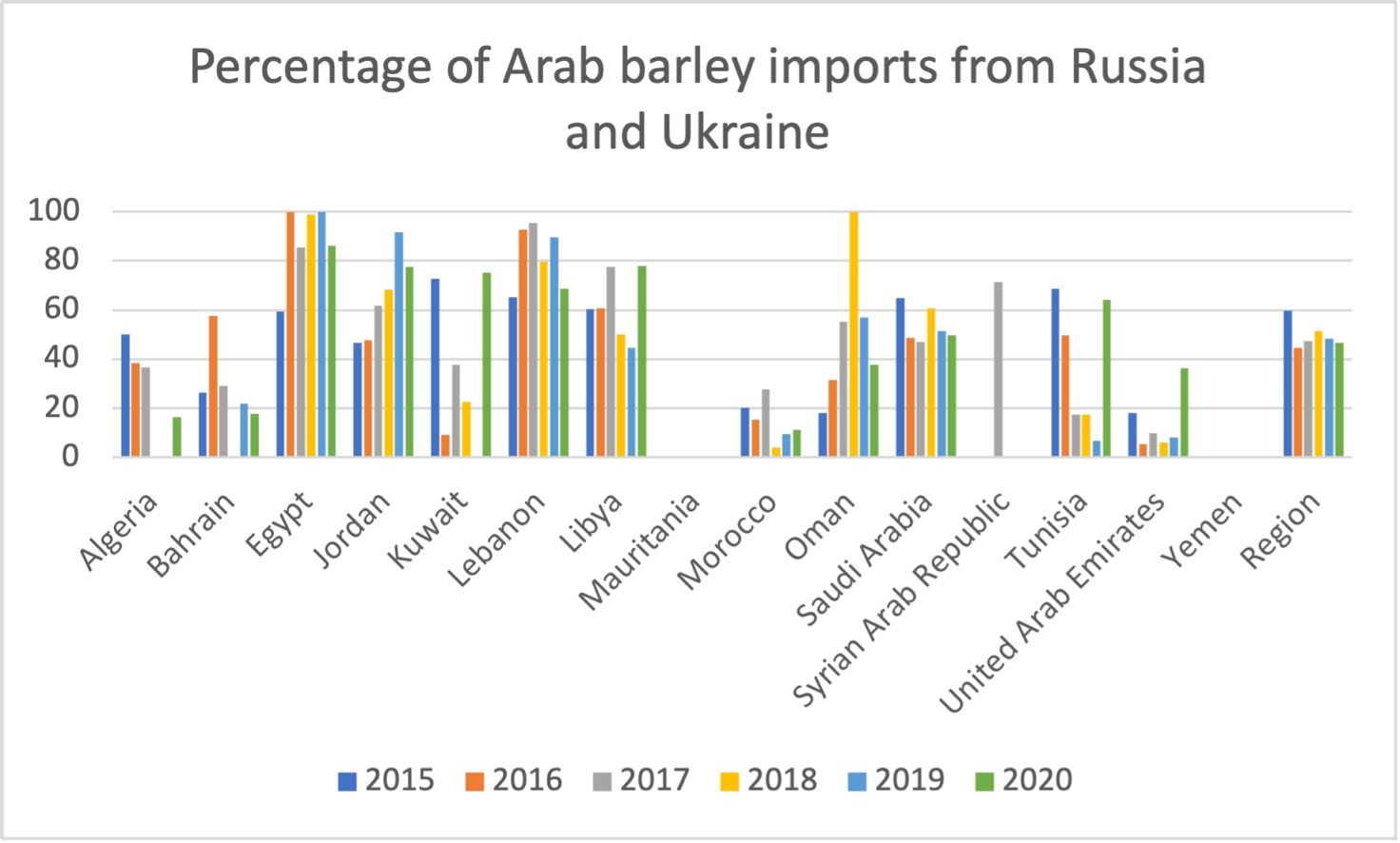 Arab reliance on wheat imports from Russia and Ukraine from 2015 to 2020 (FAO statistics 2022). No updated data available for Qatar, Somalia, Sudan, Iraq and Palestine.

Predominantly used as animal feed, barley is another important commodity sourced from Russia and Ukraine. Again, about half of the barley requirements are imported from the Black Sea with Egypt, Jordan, Lebanon, Libya, Syria, Saudi Arabia and Tunisia being the most dependent countries as their barley imports are not diversified.

Any long-term disruption of trade relations could significantly limit the availability of barley. The same applies to the price of meat and dairy products as they depend on animal feed such as barley or maize. 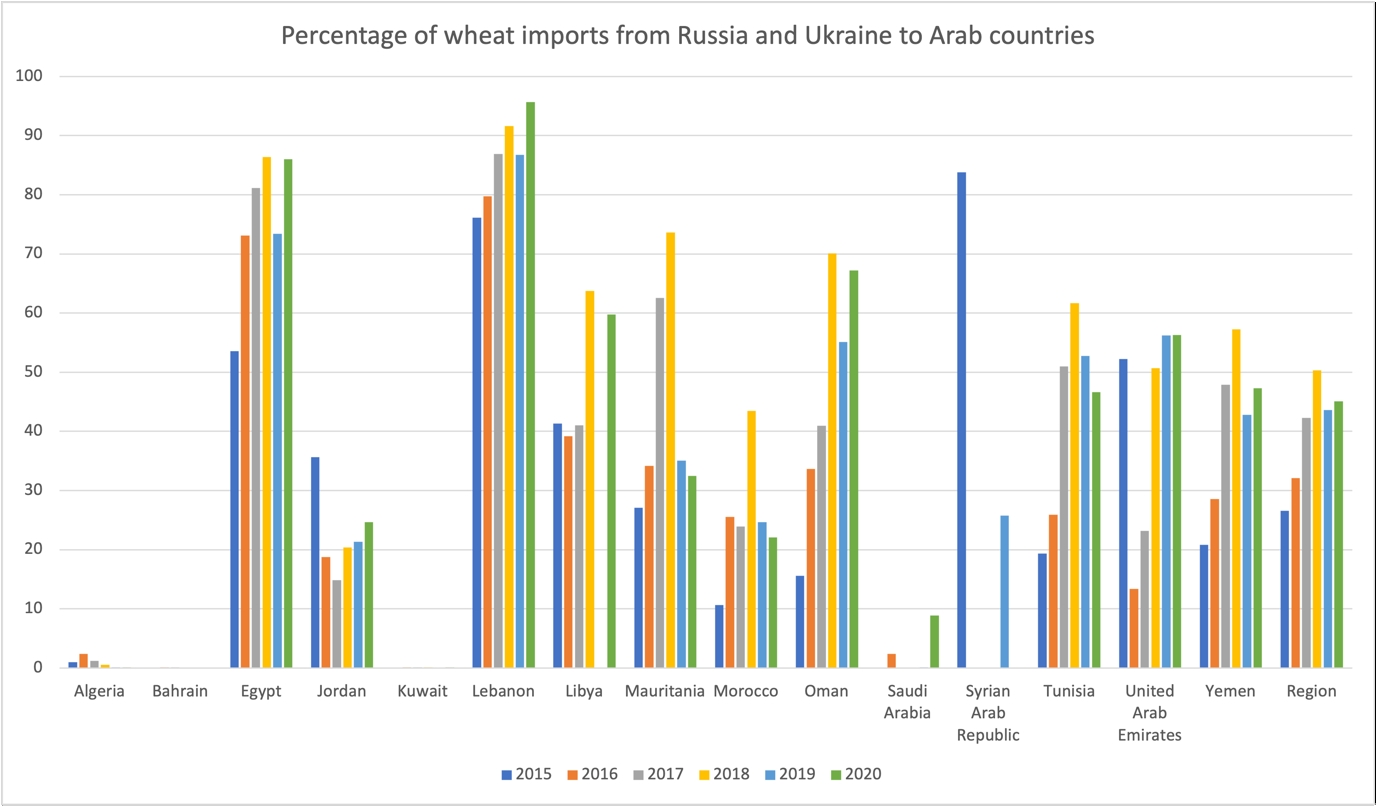 Arab reliance on barley imports from Russia and Ukraine between 2015 and 2020 (FAO statistics 2022). No data available for Somalia, Sudan, Iraq, Qatar and Palestine.

The short-term, medium-term and long-term consequences

The timing poses significant challenges to Arab region governments, private sector players and consumers. Cereal harvests in Arab countries will not start before the middle of the second quarter, while in Europe and North America wheat is sown in autumn and harvested in July. This leaves little room for major production expansions in 2022 (Abay et al., 2022).

The most significant consequences will appear in the short-term future impacting on Ramadan in the most economically vulnerable countries when food consumption is generally higher than normal. The most vulnerable countries are Somalia, Iraq, Lebanon, Palestine, Libya and Yemen that have little or no access to hard currencies to cover the costs of expensive emergency wheat imports.

Consequently, wheat rationing and the increased use of available storage might be inevitable. Arab countries differ according to their storage. While Lebanon has about one month of wheat storage available, Egypt has wheat for four months and last year Saudi Arabia increased its storage facilities by 37% (Schroeder, 2021; Walsh, 2022).

Since agricultural commodity markets are uncertain, market transparency and policy dialogue must be strengthened to ensure international markets function properly and trade in food and agricultural products flows smoothly.

However, the capacity of these countries to insulate against a major shock was displayed during the 2008/2009 food price spikes when every country in the region, except Morocco and Syria, experienced food inflation of over 20% (FAO, 2020).

In the medium-term, countries must carefully weigh their existing measures against the potentially detrimental effect on international markets. Alternative wheat and barley sources must be identified – including North and South America, Australia and India. The latter has already announced it can increase its wheat production by 2023 to mitigate some of the global shortage (Times of India, 2022). Yet procuring wheat from more distant regions comes with increased prices given boosted transportation costs.

The Black Sea crisis similarly affects oil and gas prices ultimately leading to increased shipping and fertiliser costs. Emergency loans and budgetary support for food subsidies must continue to mitigate the effect on the Arab region’s poor, but might face challenges of fiscal sustainability.

Expectations are for the wheat market crisis to last until 2023 (Abay et al., 2022). Hence, long-term effects will further cripple Arab countries. Limited mitigation and diversification opportunities might exist through dietary changes towards rice and other traditional starchy crops such as durum wheat, aestivum and sorghum that can be grown under marginal conditions in the water-scarce region.

Durum wheat and aestivum are either dried or smoked to become bhurgul and freekeh that are an ancient tradition especially in the Maghreb and Mashreq countries (Ohr, 2014; Toufeili et al., 1997). Good yields can be expected with supplementary irrigation.

However, traditional starchy crops will only contribute to food security; not provide self-sufficiency. Eventually, global markets will stabilise once farmers react to price signals and shift to wheat production.

This will further stabilise global grain markets. However, Arab governments might have to diversify trading partners, but this will come at a price. Russian and Ukrainian wheat typically trade at a discount compared to higher quality wheat from other regions; hence alternative supplies will be more expensive notwithstanding the higher transport costs.

Dr Martin Keulertz is an assistant professor in the Food Security Programme as the American University of Beirut, Lebanon. His research interests centre on strategies for food and water security in the Middle East and North Africa (MENA) region and how a rapidly growing region can address its future food requirements through sustainable and adapted domestic production, food technology innovation and agricultural trade.