BY Claire Jiao and Arys Aditya 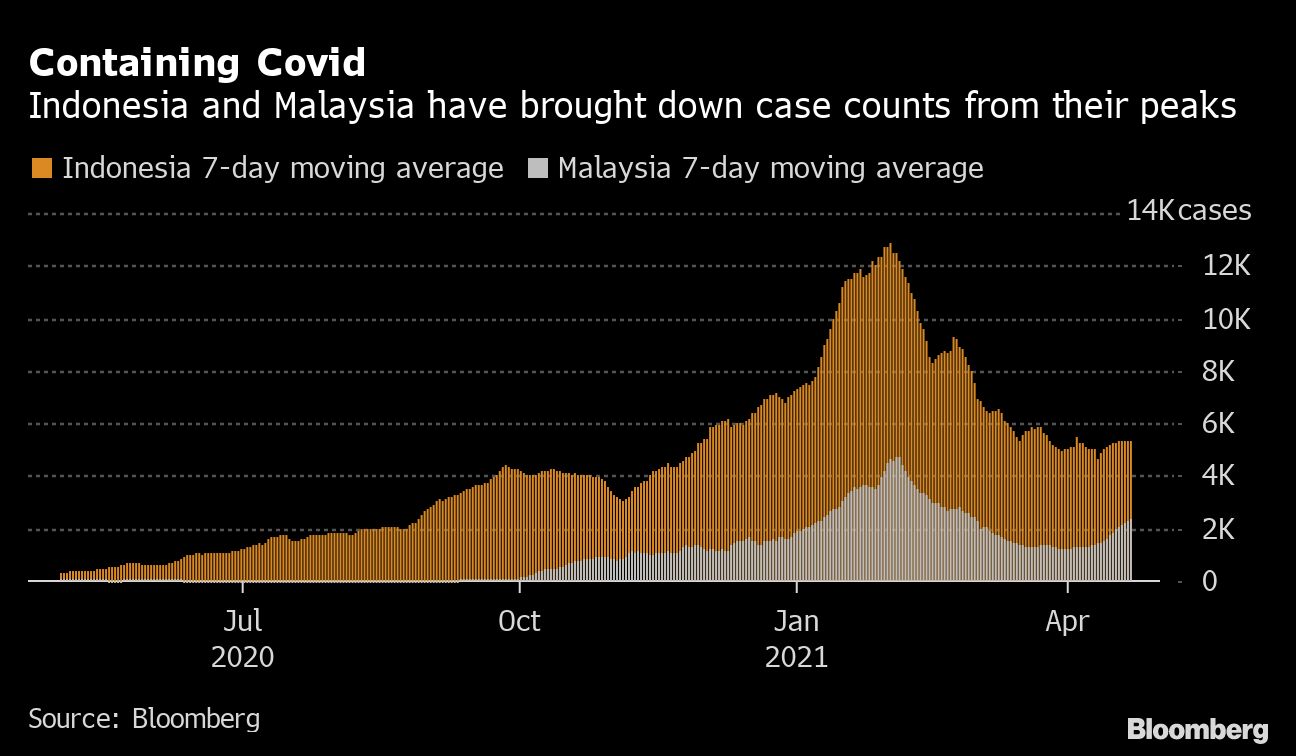 Indonesia and Malaysia will limit travels toward the end of the month-long fasting period which typically sees more than 81 million people head home to regional towns from urban centers, a holiday migration similar to Thanksgiving in the U.S. or Lunar New Year in China. Violators could face fines or jail time, though exemptions will be allowed for emergencies.

The restrictions are aimed at avoiding a resurgence in cases similar to those playing out in other developing countries, which are threatening overall global growth. India set a daily record for cases this week, while infections are also rising in Turkey, Argentina and Brazil.

Eid al-Fitr, the biggest and busiest Muslim holiday, is usually celebrated with people reuniting with family and friends in their hometowns, sharing meals and gifts, and praying together. This will be the second straight year that festivities have been muted, which could further dampen growth outlooks in both countries where consumer spending is a main driver of their economies.

“Spikes in cases are closely related to mobility, or in this case, people traveling during the long holidays,” said Siti Nadia Tarmizi, spokesperson for Indonesia’s health ministry. “We don’t want this happen again in the Eid holiday. Every measure should be done so that the transmission of Covid-19 can be minimized as much as possible.”

Restrictions last year succeeded in flattening the virus curve in Malaysia, according to the government. Similar measures to limit movements are cropping up in other Muslim-majority nations in the Middle East and North Africa. Kuwait banned sermons and banquets at mosques, Dubai prohibited large gatherings, while Morocco extended its nationwide curfew through Ramadan.

The concern comes as Indonesia and Malaysia are seeing a slowdown in their mass vaccination programs due to a global shortage of shots. Indonesia, among the first and fastest in Southeast Asia to inoculate its population, will be keen to sustain its gains in slowing the virus spread. Malaysia, meanwhile, is already seeing the beginnings of a fresh wave of infections.

Any setback would undermine both countries’ plans for gradual economic reopening that would pave the way for a strong rebound this year. Malaysia’s central bank expects gross domestic product to return to pre-pandemic levels by mid-year and grow 6%-7.5% in 2021. Bank Indonesia estimates a milder expansion of 4.1%-5.1%.

Still, there’s growing resistance to the curbs in Indonesia, which has previously struggled to enforce checkpoints across its archipelago. The country’s transport minister Budi Karya Sumadi estimates roughly 20 million people will still find other ways to travel and avoid the ban that stretches through May.

Noviendriza, a 42-year-old mother of two, plans to fly from Jakarta to Padang city in West Sumatra province at the end of the month, and then take a road trip to Medan city up north. After four years of not being able to visit home, she wants to be able to pay respects to her father’s grave during Ramadan.

“We are still afraid with the virus spreading, but we are always strict with our health protocols when we travel. We believe that the airplane is safe for us,” she said.

There is also confusion over seemingly conflicting regulations as governments promote other leisure activities to capitalize on the Ramadan holiday spending. Malaysia has allowed bazaars and restaurants to operate, while Indonesia is encouraging people to visit local tourist sites during the break.

According to Pandu Riono, an epidemiologist at the University of Indonesia, the government should be even more stringent. With the pandemic dragging on to over a year and inoculation underway, a combination of lockdown fatigue and “vaccine euphoria” is making people less compliant with mask-wearing and distancing during the Eid celebrations.

“We will see cases increasing after Ramadan,” Riono warned.

For more articles like this, please visit us at bloomberg.com