Photo: Aab modest fashion wear displayed in the shopfront at Debenhams Mall of the Emirates, Dubai, UAE on May 16, 2017

London-based modest fashion company Aab took off on its international journey this week across 14 Debenhams department stores in the Middle East and Southeast Asia, landing the mainly online brand on the shop floor at the touch and feel of a Muslim-majority customer base.

For the brother-sister team of Altaf and Nazmin Alim, the founders of Aab, the journey started with one tailor. “When we started 10 years ago we were really naïve. We would go to factories and say ‘we’ve got this brand, we’ve got this idea,’ and they’ll say ‘no’, because we just didn’t have the volume. Every door kept getting shut,” Altaf told Salaam Gateway.

“We started with one tailor producing 10 pieces that grew into one small room that became two rooms, then one floor, two floors, three floors, four floors. We ran with that as long as we could,” he added.

The company has grown organically through free cash flow and in September 2015 opened its own dedicated production facility in Karachi that supplies to its flagship shop in East London and its second outlet in the northern England town of Bradford. Both opened within nine months of each other in 2015 and Altaf and Nazmin are now supported by a team of 20 in the UK. While Aab has established a physical presence in its home base, e-commerce has been key to its growth.

“We have a bricks-and-mortar strategy and we have an online strategy. Our online business is the main driver [of our growth]. Almost 80 percent of our business is online and of that, 45 percent is international,” said Altaf.

The U.S. and Southeast Asia are Aab’s biggest e-commerce markets but the company is seeing what it considers “encouraging growth” from the Middle East, driven by what Altaf believes to be an improving e-commerce infrastructure.

“The Middle East is a smaller market as a percentage of our total but the actual percentage growth of the Middle East for us is superseding the other regions. I think a lot of that is caused by the momentum that’s happening behind e-commerce. What this demonstrates to us is that the shopper in the Middle East loves the brand but perhaps what’s been putting them off from shopping online is paying for delivery or returns,” said Altaf.

Debenhams has opened the doors for Aab in Bahrain, Iran, Kuwait, Saudi Arabia, and the United Arab Emirates, as well as Malaysia and Indonesia, but despite their obvious excitement at the market potential Altaf and Nazmin say they will take a “measured approach”.

Without disclosing any details or sales projections, both indicate that sales from the first three days of the Middle East roll-out have been encouraging: “Let’s just say we’re seeing units sold on a daily basis,” said Altaf.

“We’re both taking a very experimental approach to this. We’re taking the first two months to see customer response to the products,” he added.

Their approach is shared by Debenhams. Jeanette Whithear, the department store’s Trading Director International, told Salaam Gateway it had launched the same Aab products across its 14 stores in the Middle East, Malaysia, and Indonesia so it can better understand customer profiles as feedback comes through.

“As we learn what’s selling that will give us the chance to adapt,” she added.

Debenhams and Aab are relying on each other for access into new markets. Whithear said Debenhams’ first venture into modest fashion is partly driven by Aab: “We’ve also been very led by the brand and what they know about their customers already. It’s one of the reasons for our partnership in terms of giving us a wider customer spectrum to appeal to the different markets,” said Whithear.

She stressed the partnership between Debenhams and Aab pivots on the international growth potential for both parties: “The focus for us has always been the international markets because that’s where we believe the real opportunity is. In the Middle East alone we’ve got over 30 stores and we’re growing our business,” she said.

“Iran is a growing market for us,” added Whithear.

Beyond the Middle East and Southeast Asia, Debenhams has also committed to five pop-up Aab shops in its London and Midlands stores, which are the catchment areas for Aab’s British Muslim customer base. According to Whithear the Debenhams-Aab UK partnership is a “trial” for the department store to understand the potential of its home market: “It’s a small curated range that we’re going for Ramadan,” said Whithear.

Children’s wear is the store’s biggest seller in Muslim markets during Ramadan, followed by occasion wear. Whithear is confident Debenhams has chosen the right Aab range for the season: “The collection that we have from Aab for Ramadan is the black collection with the gold, which should be really strong,” she said.

Even with striking gold on black, Nazmin, Aab’s creative director, describes its style as “demure,” and distinct by its muted colours and silhouettes.

While she and her brother continue on their maiden international retail journey, for Debenhams the partnership is also an opportunity to learn more about Islamic markets and the purchasing habits in modest fashion. “The collateral that we use for Ramadan in our stores internationally, we take back to the UK. It’s lovely to see our international business having an influence on our UK business as well,” said Whithear.

And according to her, the department store could be coming back for more of Aab: “Once we have assessed and learnt from initial performance, the plan is to roll out to more stores over the next two years,” said Whithear. 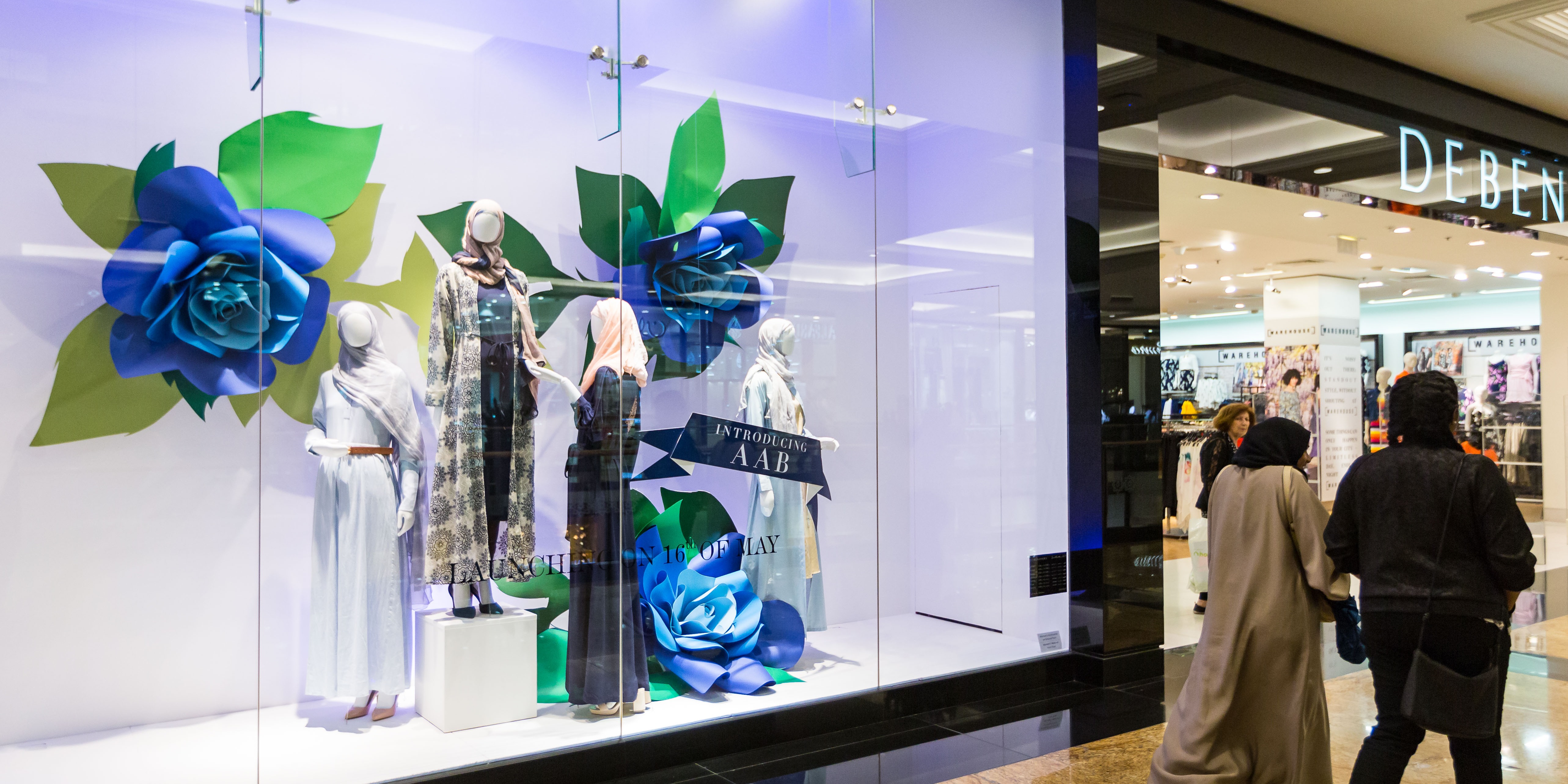 Spurred by Debenhams, modest wear Aab banks on ‘encouraging growth’ from Mideast
London-based modest fashion company Aab took off on its international journey this week across 14 Debenhams department stores in the Middle East and Southeast Asia, landing the m..
https://www.salaamgateway.com/story/spurred-by-debenhams-modest-wear-aab-banks-on-encouraging-growth-from-mideast