DUBAI - The UAE’s status as a centre for Islamic art and design was boosted this past week as Jameel Arts Centre opened the Jameel Prize 5 exhibition, on tour in Dubai for the first time from the Victoria & Albert Museum in London.

First awarded in 2009, the Jameel Prize is a collaboration between the V&A and Art Jameel. Worth 25,000 British pounds, it awards contemporary artists and designers inspired by Islamic tradition.

“We’re working on legislations and policies to support the creative and cultural sector, and Islamic art is part of that,” she said.

The minister inaugurated the exhibition on April 24 with Nicholas Coleridge, chairman of the V&A, and Fady Mohammed Jameel, president of Art Jameel.

‘SO LITTLE WE KNOW ABOUT ISLAMIC ART’

Mehdi Moutashar, one of the two winners, was awarded for his four bold works of minimalist abstraction rooted in Islamic geometry, which are on display at the Jameel Arts Centre until mid-September.

“All my life has been inspired by Islamic art, not in the traditional sense but something more profound,” Moutashar told Salaam Gateway.

“The logic behind my work for more than 50 years is the square. The square is an abstract concept, but it is also a way of measuring and materializing space. That is what the Arabesque did and how calligraphy was founded.”

“There is so little we know about Islamic art and culture. We know what the Europeans wanted to tell us and what they understood - but they understood nothing,” said the artist, who was born in Iraq in 1943 and moved to France in the late sixties.

“They thought it was a form of decoration. For example, a lot of people don’t know that calligraphy is written like symphonic music. Calligraphers who write the letters and words measure them by millimeter. The calligraphy you see in mosques and other places is very sophisticated.”

A selection of Moutashar’s artworks is available at Albareh Art Gallery in Bahrain, including Mouvement 9.5, 2016, which is being sold for 30,000 euros.

However, the financial aspect of his artwork is the least of his concerns. “I never thought of making art a fundamental practice or making a living through it and I still don’t think of it this way. When it becomes a business, I will stop doing it,” said Moutashar.

“There are people who think my work is interesting. If people like it and buy it then that’s great and I’m happy. My business is to work and think. The notions of pleasure, seriousness and intelligence are what lead my work.”

The Jameel Prize, added Moutasar, has introduced a new way of looking at Islamic and Arabic heritage that he hopes people will try to understand and discuss.

FROM PALESTINE TO THE WORLD

In its 10-year history, Jameel Prize received 1,193 nominations from more than 40 countries (this year’s Prize received almost 400), and exhibited the work of 48 artists and designers, touring 16 venues globally.

Such international exposure is what naqsh collective is looking forward to after being selected as one of six finalists for Jameel Prize 5.

Founded by Jordanian-Palestinian sisters Nermeen and Nisreen Abudail in 2010 in Amman, naqsh brings together their skills to create unique pieces of furniture, home accessories and art inspired by contemporary and traditional Arabic aesthetics.

Recently they adopted the traditions of 18th and 19th century cross-stitching embroidery from Syria and Palestine as their sole concept.

“Our artwork talks about Palestinian embroidery and how such crafts flourished during the Islamic era, becoming a way for women to communicate and express their identity.

“The origin of the embroidery came from the Copts and the Palestinians developed it and added their own signature to it. Its beauty and strength lie in the way it integrates the essence of both religions harmoniously,” Nisreen, a qualified architect, told Salaam Gateway.

The Jameel Prize has already added value to naqsh collective’s work due to the exposure they have been getting.

“We’ve moved from a regional to an international level of recognition very fast,” said Nermeen.

She acknowledges it wasn’t easy to make a living out of art. “We started with small steps in Jordan where we were designing our pieces, participating in exhibitions and selling our work. From Amman, moving to Dubai then moving to other exhibitions around the region, we grew organically though our work and the recognition it generated.”

“We want to transcend the embroidery from traditional dresses to artwork that crosses borders and boundaries, where it tells the stories of people of diaspora and the culture that Palestinians have, but didn’t get the chance to share with the world because of their status.”

Antonia Carver, director of Art Jameel, told Salaam Gateway the Jameel Prize 5 exhibition will run nearly twice as long as it did in previous venues– from April to September 2019.

“The idea of giving it such a long run was that we activate all the way through this time with public programs. All the artists involved - winners and finalists - are coming during this time to give workshops and engage the public in their work,” Carver told Salaam Gateway.

“In autumn, we have another exhibition coming up which looks at architecture and archaeological histories in the region - what do you if a monument has been destroyed, and how to rebuild it.”

Tragically, many parts of the Middle East are losing architectural history and a lot of artists are looking at whether to rebuild the same, the best copies, the use of 3D technology, and whether that would represent the real essence of the architecture, she said.

Against this background, the UAE aims to become a capital for art and culture in a region that demands not just repair and upkeep of its heritage and histories, but also advancement.

The government’s ‘Soft Power Strategy’ was launched in 2017 to boost its global reputation by highlighting its identity, heritage, culture and contributions to the world. Establishing the UAE as a regional capital for art and culture is one of the Soft Power Council’s main objectives. Islamic art is one component.

“We highlight Islamic art in events like the Jameel Prize and Art Dubai and we have a talk happening in London with regards to Al Burda. Also, the investment we did by publishing a book with Roxane Zand (an Iranian arts professional and deputy chairman of Middle East at Sotheby's) which talks about Islamic art and geometry.”

Launched in March 2019, ‘Geometry and Art in the Modern Middle East’ by Roxane Zand and Sussan Babaie celebrates the influence of Islamic geometry on modern and contemporary art.

Al Burda Festival was launched in November 2018 and will be held every two years. The event is an offshoot of Al Burda awards, a 14-year-old competition for Islamic art, calligraphy, ornamentation, and classical poetry.

“After 14 years of such an award we thought why don’t we have a festival? This festival has a lot of partners like Art Jameel, Department of Culture and Tourism - Abu Dhabi, and Sharjah Art Foundation.

“After the festival, we gave the awards to the winners and then announced an endowment for 10 artists from the region to work on their art which should be inspired by Islamic art and culture,” Minster Al Kaabi told Salaam Gateway.

For the UAE to be instantly recognized as an Islamic arts and culture hub, the ministry will continue to work with the private sector and non-profit organizations such as Art Jameel, and support emerging artists.

“These artists are the future, so it’s our duty to support them and take them to the next level.” 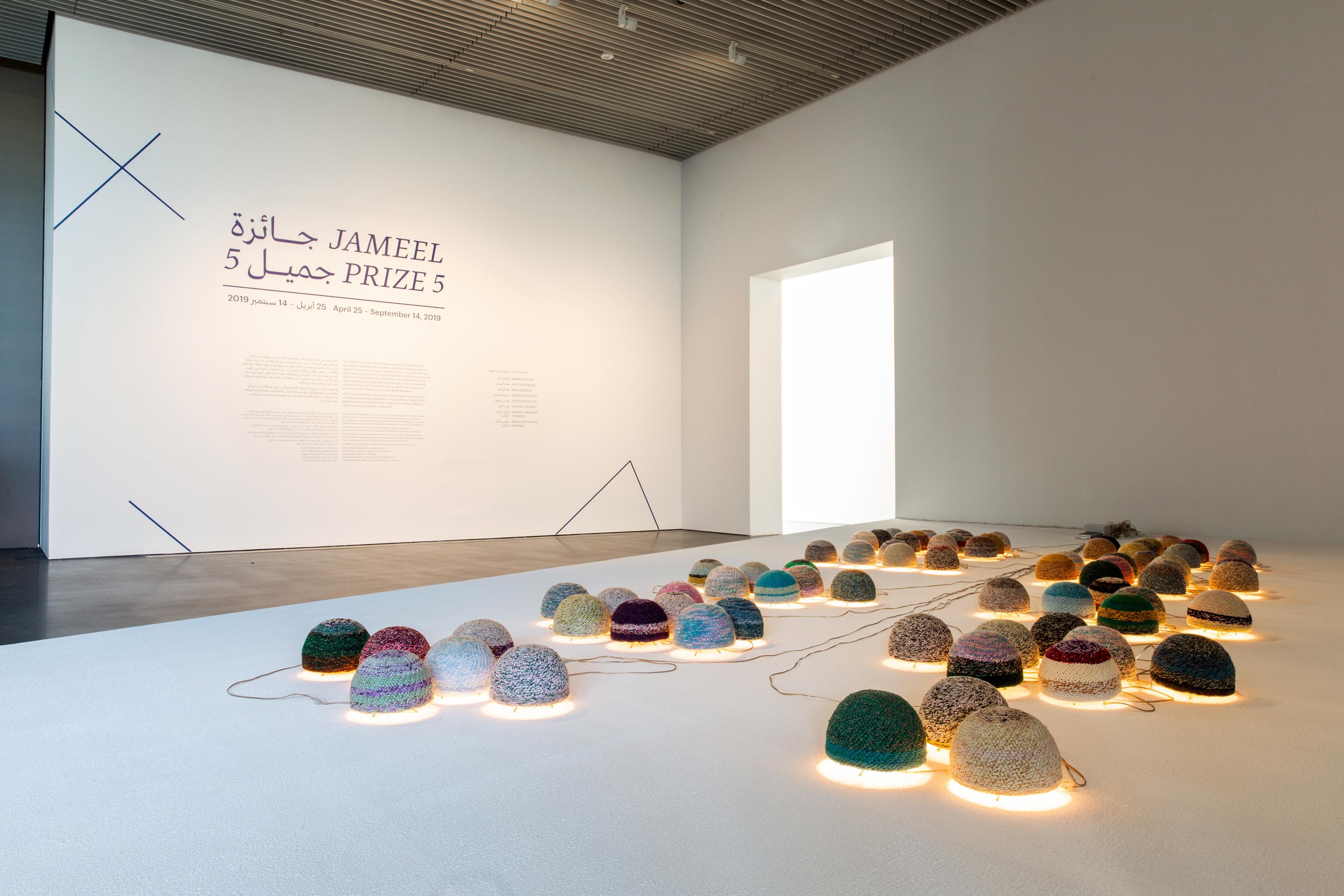 UAE aim to become regional Islamic art and culture capital boosted by Jameel Prize’s first exhibition in Dubai
DUBAI - The UAE’s status as a centre for Islamic art and design was boosted this past week as Jameel Arts Centre opened the Jameel Prize 5 exhibition, on tour in Dubai for the first time from..
https://www.salaamgateway.com/story/uae-aim-to-become-regional-islamic-art-and-culture-capital-boosted-by-jameel-prizes-first-exhibition