2.35 million pilgrims performed the haj last year, 75 percent of whom arrived in Saudi Arabia from 168 countries. Most Muslims perform the obligatory haj only once in their lifetime and the combination of rituals in a foreign land and in close proximity to more than 2 million other pilgrims can make the journey overwhelming.

Eager to improve pilgrims’ experience, Saudi authorities recently held a haj hackathon to find tech solutions. But even before that big push, in which 2 million Saudi riyals ($533,333) were awarded in prizes, a handful of app developers has for a few years been capitalising on virtual reality (VR) technology to help prepare first-time pilgrims and to show non-Muslims what it’s like to go on the pilgrimage.

“We believe it’s a powerful tool that acts as a guide for people doing pilgrimage for the first time. We also want to shatter stereotypes of how Muslims are portrayed in the media,” Wael Ramadan, chief technical officer at Cairo-based Vhorus, the company behind Experience Makkah and the first Middle Eastern developer to offer an app on Oculus VR store, told Salaam Gateway.

Experience Makkah was conceived by Vhorus chief executive Ehab Fares. The app provides an interactive experience in which the user can walk around Mecca in VR, interact with informational podiums and get an audio reference on the stories behind historical sites.

Experience Makkah has been downloaded more than 180,000 times since its release in April 2016.

An app released a few months after, Manasik VR, has seen a comparable number of downloads - 150,000 - since August 2016. Manasik was designed to provide a first impression of Mecca for newcomers.

“It’s not the [high] figure you would expect for a mobile app, but since Manasik is designed for VR, we have no other case to compare it with. Looking at market penetration, it’s a positive figure for our beta product,” Fahed Mahidi, software department manager at Saudi Arabia’s Zad Group, the developer of Manasik VR, told Salaam Gateway.

A similar VR app, launched in 2014, has enjoyed more downloads. Makkah 3D, originally called Mecca 3D when it launched four years ago, has now been downloaded more than 500,000 times on the Android store. The app was initially developed by Brainseed Factory and has now moved to Bigitec, a Germany-based company. Both were founded by Bilal Chbib.

“Think of Makkah 3D as a living virtual museum. All aspects of Islamic lifestyle and worshipping rituals will be accurately represented and taught in a sophisticated 3D environment,” Chbib, the managing director of Bigitec, told Salaam Gateway.

The full version Makkah 3D should be out in six months, said Chbib. Bigitec plans to launch a crowdfunding campaign in a couple of weeks to help expedite the completion of the project, Chbib told Salaam Gateway.

Chbib and Bigitec are also behind another popular Islamic app, Memorize Quran, which has been downloaded over 4 million times since 2014.

Experience Makkah, Manasik VR and Makkah 3D are not alone. Encouraged by the sheer number of pilgrims and business opportunities to serve them, the haj VR segment is still attracting new players.

Another company hoping to tap the market is Miradj360 VR.

“People who want to go for umrah or haj usually apply through specialised agencies and rely on brochures supplied by those operators to get the knowledge they need,” Ruslan Sabirzyanov, co-founder of Miradj360 told Salaam Gateway.

Miradj360 is currently in development. It comprises text and video and the next step is to add audio narrative in different languages.

The company is also developing a business version for haj operators to use with their customers, without the need for an internet connection.

“What we want to bring to people is not only knowledge, but also the chance to see how things are in reality. Because many people when arriving there get so emotional that they just forget whatever they learnt. Our app will help them to visualise how things will be,” said Sabirzyanov.

“Apart from a few exceptions, all available products are not properly conceived or thought out. You can see there are no key players in the market. Our mission is to help fill that gap, using our long-standing skills in software and videogame development,” said the Bigitec founder.

“The business of Islamic apps is still untapped. It’s growing - you see many mobile apps popping up – but most of them are solving the same problems in the same old ways,” said Mahidi.

“We need design thinking to be applied more consistently on product creation. And we need to go beyond the challenges in the market and start to innovate in ways that push the Islamic community forward,” Mahidi added.

There are exceptions and Islamic apps could be very profitable, said Mahidi, citing the acquisition of Muslim Pro as an example. Muslim Pro has been downloaded more than 53 million times since its launch in 2010 and is by far the most popular Islamic app. The company behind it, Bitsmedia, was acquired by a private equity firm last year.

Most companies, however, are developing products without sustainability in mind.

“They fail to catch a big opportunity in front of them. So, in my opinion, the industry is not currently profitable, though it could be easily. We just need professionals to start exploring the market,” Mahidi said. 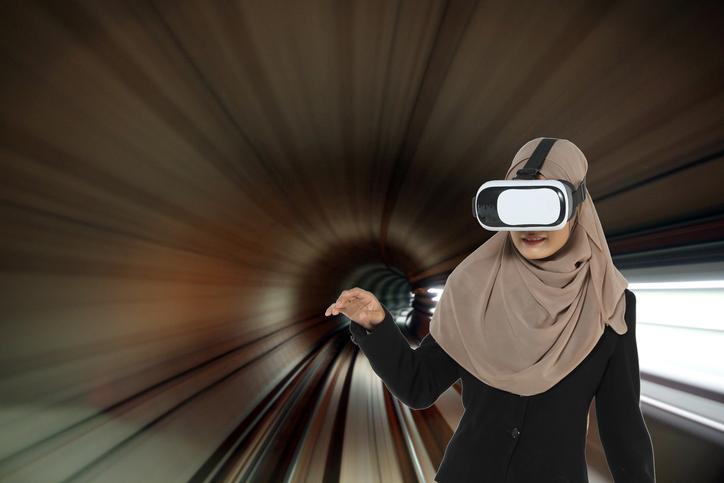